Last week the mitigation sceptics apparently expected climate data to be highly reliable and were complaining that an update led to small changes. Other weeks they expect climate data to be largely wrong, for example due to non-ideal micro-siting or urbanization. These concerns can be ruled out for the climate-quality US Climate Reference Network (USCRN). This is a guest post by Jared Rennie* introducing a recent study comparing USCRN stations with nearby stations of the historical network, to study the differences in the temperature and precipitation measurements. 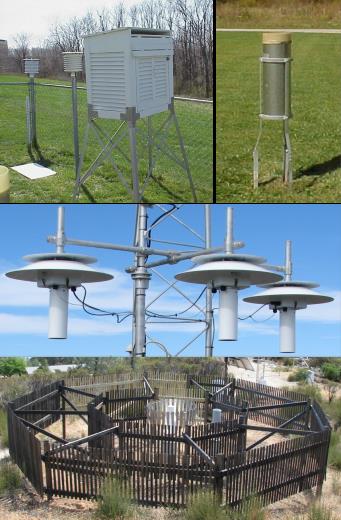 In 2000 the United States started building a measurement network to monitor climate change, the so called United States Climate Reference Network (USCRN). These automatic stations have been installed in excellent locations and are expected not to show influences of changes in the direct surroundings for decades to come. To avoid loss of data the most important variables are measured by three high-quality instruments. A new paper by Leeper, Rennie, and Palecki now compares the measurements of twelve station pairs of this reference network with nearby stations of the historical US network. They find that the reference network records slightly cooler temperature and less precipitation and that there are almost no differences in the temperature variability and trend.

The detection and attribution of climate signals often rely upon long, historically rich records. In the United States, the Cooperative Observer Program (COOP) has collected many decades of observations for thousands of stations, going as far back as the late 1800’s. While the COOP network has become the backbone of the U.S. climatology dataset, non-climatic factors in the data have introduced systematic biases, which require homogenization corrections before they can be included in climatic assessments. Such factors include modernization of equipment, time of observation differences, changes in observing practices, and station moves over time. A part of the COOP stations with long observations is known as the US Historical Climate Network (USHCN), which is the default dataset to report on temperature changes in the USA.

Recognizing these challenges, the United States Climate Reference Network (USCRN) was initiated in 2000. 15 years after its inception, 132 stations have been installed across the United States with sub-hourly observations of numerous weather elements using state-of-the-art instrumentation calibrated to traceable standards. For a high data quality temperature and precipitation sensors are well shielded and for continuity the stations have three independent sensors, so no data loss is incurred. Because of these advances, no homogenization correction is necessary.

The purpose of this study is to compare observations of temperature and precipitation from closely spaced members of USCRN and COOP networks. While the pairs of stations are near to each other they are not adjacent. Determining the variations in data between the networks allows scientists to develop an improved understanding of the quality of weather and climate data, particularly over time as the periods of overlap between the two networks lengthen.

To ensure observational differences are the result of network discrepancies, comparisons were only evaluated for station pairs located within 500 meters. The twelve station pairs chosen were reasonably dispersed across the lower 48 states of the US. Images of the instruments used in both networks are provided in Figure 1.

An important measurement problem for rain gauges is undercatchment: due to turbulence around the instruments not all droplets land in the mouth. This is especially important in case of high winds and for snow and can be reduced by wind shields. The COOP rain gauges are unshielded, however, and have been known to underestimate precipitation in windy conditions. COOP gauges also include a funnel, which can be removed before snowfall events. The funnel reduces evaporation losses on hot days, but can also get clogged by snow. Hourly temperature data from USCRN were averaged into 24 hour periods to match daily COOP measurements at the designated observation times, which vary by station. Precipitation data was aggregated into precipitation events and also matched with respective COOP events.

Observed differences and their reasons

Overall, COOP sensors in shields naturally ventilated reported warmer daily maximum temperatures (+0.48°C) and cooler daily minimum temperatures (-0.36°C) than USCRN sensors, which have better solar shielding and fans to ventilate the instrument. The magnitude of temperature differences were on average larger for stations operating LiG systems, than those for the MMTS system. Part of the reduction in network biases with the MMTS system is likely due to the smaller-sized shielding that requires less surface wind speed to be adequately ventilated. 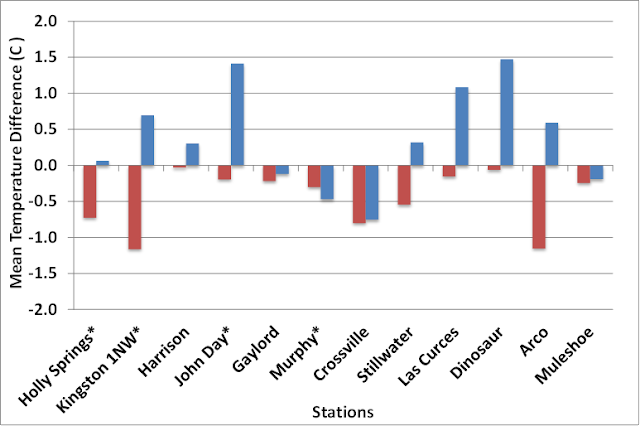 For precipitation, COOP stations reported slightly more precipitation overall (1.5%). Similar to temperature, this notion was not uniform across all station pairs. Comparing by season, COOP reported less precipitation than USCRN during winter months and more precipitation in the summer months. The dryer wintertime COOP observations are likely due to the lack of gauge shielding, but may also be impacted by the added complexity of observing solid precipitation. An example is removing the gauge funnel before a snowfall event and then melting the snow to calculate liquid equivalent snowfall.

Wetter COOP observations over warmer months may have been associated with seasonal changes in gauge biases. For instance, observation errors related to gauge evaporation and wetting factor are more pronounced in warmer conditions. Because of its design, the USCRN rain gauge is more prone to wetting errors (that some precipitation sticks to the wall and is thus not counted). In addition, USCRN does not use an evaporative suppressant to limit gauge evaporation during the summer, which is not an issue for the funnel-capped COOP gauge. The combination of elevated biases for USCRN through a larger wetting factor and enhanced evaporation could explain wetter COOP observations. Another reason could be the spatial variability of convective activity. During summer months, daytime convection can trigger unorganized thundershowers whose scale is small enough where it would report at one station, but not another. For example, in Gaylord Michigan, the COOP observer reported 20.1 mm more than the USCRN gauge 133 meters away. Rain radar estimates showed nearby convection over the COOP station, but not the USCRN, thus creating a valid COOP observation. 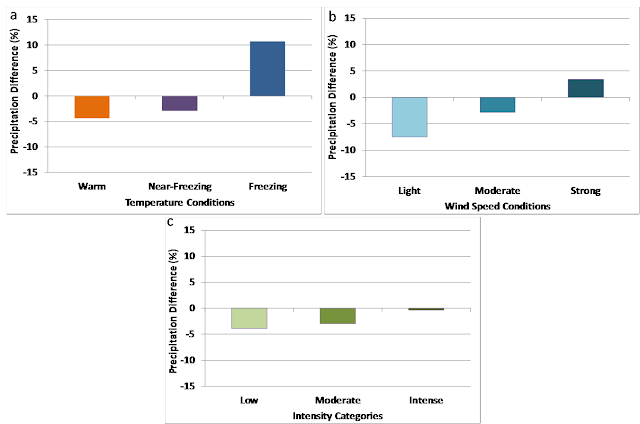 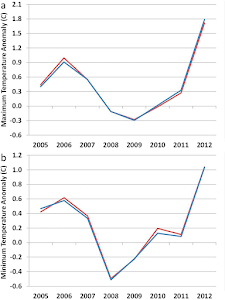 Temperature comparisons between stations in local pairings were partially attributed to local factors including siting (station exposure), ground cover, and geographical aspects (not fully explored in this study). These additional factors are thought to accentuate or minimize anticipated radiative imbalances between the naturally and mechanically aspirated systems, which may have also resulted in seasonal trends. Additional analysis with more station pairs may be useful in evaluating the relative contribution of each local factor noted.

For precipitation, network differences also varied due to the seasonality of the respective gauge biases. Stratifying by temperature, wind speed, and precipitation intensity showed these biases are revealed in more detail. COOP gauges recorded more precipitation in warmer conditions with light winds, where local summertime convection and evaporation in USCRN gauges may be a factor. On the other hand, COOP recorded less precipitation in colder, windier conditions, possibly due to observing error and lack of shielding, respectively.

It should be noted that all observing systems have observational challenges and advantages. The COOP network has many decades of observations from thousands of stations, but it lacks consistency in instrumentation type and observation time in addition to instrumentation biases. USCRN is very consistent in time and by sensor type, but as a new network it has a much shorter station record with sparsely located stations. While observational differences between these two separate networks are to be expected, it may be possible to leverage the observational advantages of both networks. The use of USCRN as a reference network (consistency check) with COOP, along with more parallel measurements, may prove to be particularly useful in daily homogenization efforts in addition to an improved understanding of weather and climate over time.

The informative homepage of the U.S. Climate Reference Network gives a nice overview.

A database with parallel climate measurements, which we are building to study the influence of instrumental changes on the probability distributions (extreme weather and weather variability changes).

The post, A database with daily climate data for more reliable studies of changes in extreme weather, provides a bit more background on this project.

Homogenization of monthly and annual data from surface stations. A short description of the causes of inhomogeneities in climate data (non-climatic variability) and how to remove it using the relative homogenization approach.

Previously I already had a look at trend differences between USCRN and USHCN: Is the US historical network temperature trend too strong?
Victor Venema at 14:58:00
Share