On the recent warming surge

"Incidentally, when in the journal Science in 2007 we pointed to the exceptionally large warming trend of the preceding 16 years, which was at the upper end of the [climate] model range, nobody cared, because there is no powerful lobby trying to exaggerate global warming."
"And of course in our paper we named natural intrinsic variability as the most likely reason. But when a trend at the lower end of the model range occurs it suddenly became a big issue of public debate, because that was pushed by the fossil fuel climate sceptics’ lobby. There is an interesting double standard there."
Stefan Rahmstorf
Maybe the comment is deleted in shame. At least I cannot find it any more. Someone on Reddit was making exactly the same errors as the fans of the infamous "hiatus" to argue that global warming since 2011 is exploding and we're soon gonna die. Deleted comments can be freely paraphrased.

So let's have a look at what the data actually says. Below are warming curves of two surface temperature datasets and two upper air temperature satellite retrievals. I shortened the warming curve of Berkeley Earth to match the period to the one of GISTEMP. All the other datasets are shown over their full lengths. Taking this step back, looking at the overview, there clearly is no "hiatus" and no "warming surge".

The red dots are the annual temperature anomalies, which are connected by a thin grey line. The long-term trend is plotted by a thick blue line, which is a [[LOESS]] estimate.

If you want to see the "hiatus" you have to think the last two data points away and start in the temperature peak of 1998. Don't worry, I'll wait while you search for it. 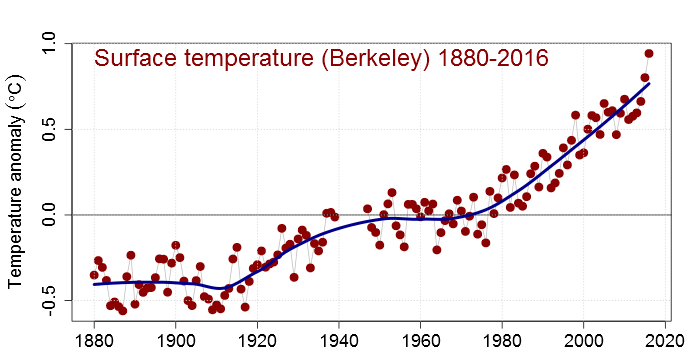 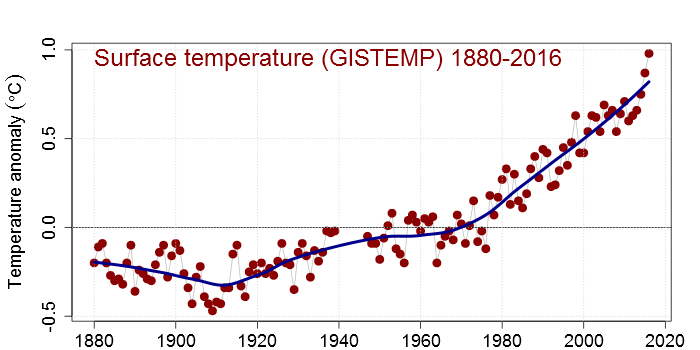 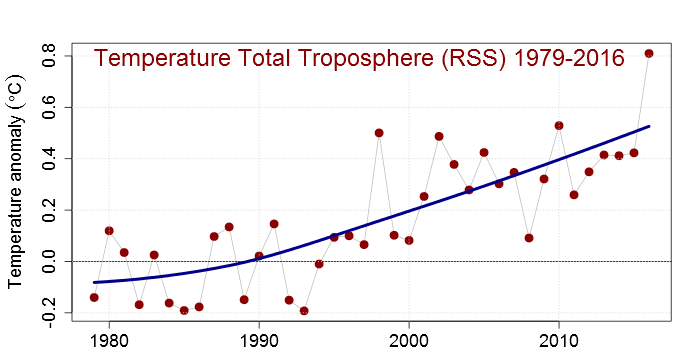 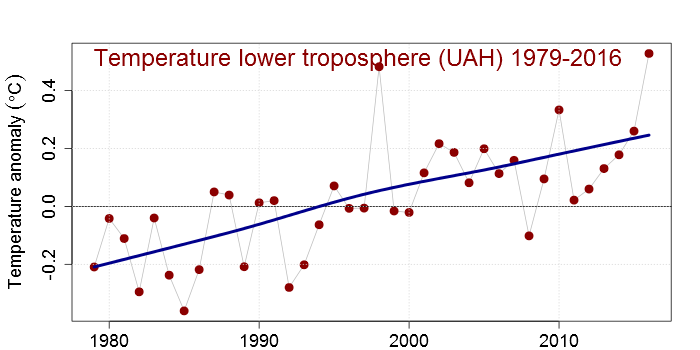 A hiatus state of mind

After seeing reality, let's now get into the mindset of a climate "sceptic" claiming to have evidence for a "hiatus", but do this differently by looking at the data since 2011.

Naturally we only plot the recent part of the data, so that context is lost. I am sure the climate "sceptics" do not mind, they also prefer to make their "hiatus" plots start around the huge 1998 El Nino warming peak and not show the fast warming before 1998 for context. 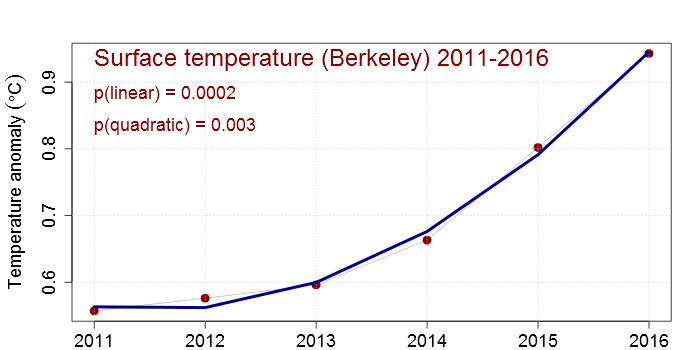 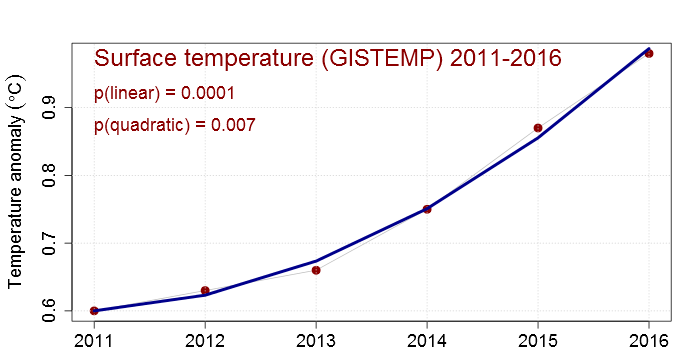 The thick blue lines are quadratic functions fitted to the data. They fit snugly. As you can see both the linear and quadratic coefficients are statistically significant. So clearly the recent warming is very fast, faster than linear and we can soon expect to cross the 2 °C limit, right?

I am sure the climate "sceptics" do not mind what I did. They also cherry picked a period for their "hiatus" and applied a naive statistical test as if they had not cherry picked the period at all. The climate "sceptics" agreeing with Christopher Monckton doing this on WUWT will surely not object to our Redditor doing the same and will conclude with him that the end is nigh.

By the way, I also cherry picked the dataset. The curves of the upper air temperature retrievals are not as smooth and the quadratic terms were not statistically significant. But in case of the "hiatus" debate our "sceptical" friends also only showed data for the datasets showing the least warming. So I am sure they do not object to this now.

If you look at the full period you can see that the variability of the temperature signal is much larger than the variability around the quadratic fit. It is thus clearly a complete coincidence that the curve is so smooth. But, well, the "hiatus" proponents also just look statistically at their cherry picked period and ignore the actual uncertainties (including slowly varying ones.)

Some more knowledgeable catastrophists may worry that it looks as if 2017 may not be another record scorching year. No worries. Also no worries if 2018 is colder again. The Global Warming Policy Foundation thinks it is perfectly acceptable to ignore a few politically inconvenient years and claims that we just have to think 2015 and 2016 away and that thus the death of the "hiatus" has been greatly exaggerated. I kid you not. I have not seen any climate "sceptic" or any "luckwarmer" complaining about this novel statistical analysis method, so surely our Redditor can do the same. Catastrophic warming surge claims are save till at least 2019. 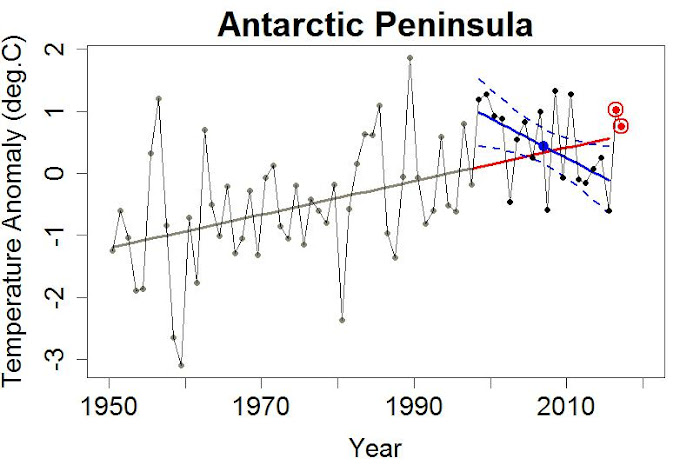 Back to reality. What to do against cherry picking periods? My advice would be: don't cherry pick periods. Not for the global mean temperature, not for the temperature of the Antarctic Peninsula, not for any other climate variable. Just don't do it.

Our cheerful Redditor had even a bit more physics in his claim. He said that the Arctic was warming and releasing more carbon dioxide and methane. However, these emissions were not large enough to make the increase in the global greenhouse concentrations speed up. And they count. From our good-natured climate "sceptics" I have never heard a physical explanation why global warming would have stopped in 1998. But maybe I have missed their interest in what happens with the climate system.

If you have no reason to expect a trend change the appropriate test would be for a trend change test at an unknown date. Such a test "knows" that cherry picked periods can have hugely different trends and thus correctly only sees larger trend changes over longer periods as statistically significant. Applied to temperature data the result of such as test does not see any "hiatus" nor any "warming surge".

This test gave the right result during the entire "hiatus" madness period. Don't fool yourself. Use good stats. 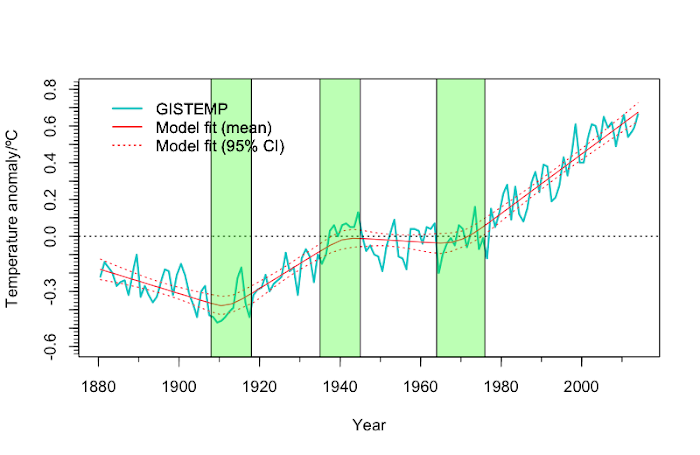 How can the pause be both ‘false’ and caused by something?

Atmospheric warming hiatus: The peculiar debate about the 2% of the 2%