Yes, it makes sense not to have diner parties while the schools are still open. Think of it as a Corona contact budget.

Can the kids go to school in restaurants

Analogies can be enlightening. Bad faith actors will always find something to nit pick, but for those interested in understanding analogies can help to open a toolbox of existing ideas and argumentative structures.

I wondered whether it may be useful to talk about Corona contacts as a budget.

It would avoid arguments like "if churches can be open, why can't we have concerts under similar conditions". "If you cannot meet indoors with more than 15 people, then why are schools open? Math!"

Similarly in the political realm: "if we can have social security, why can't we have a basic income (social security for all)?" For me a basic income is freedom, fulfilment of human potential and prosperity, but you will have to find the money. "If we can spend 10% of our GDP on healthcare as an average OECD country, why can't we spend 20%?" You can, and America does, but it will still be hard to find the funding for the additional 10% if countries with universal health care wanted to destroy their system and adopt the American partial system. 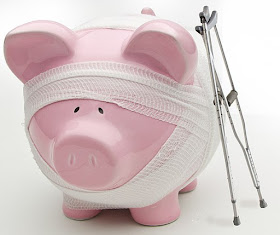 When it comes to budgets it is immediately clear that you have to set priorities and invest wisely.

The reproduction number of the SARS-CoV-2 virus is between two and three. Let's assume for this article that it is two to get easier numbers. This means that one infected person on average infects two other people. If we reduce number of infectious contacts by more than half the virus would decline.

The "on average" does a lot of work. How many people one person infects varies widely. As a rule of the thumb for SARS2: Four of five infected people only infect one other person or none, while one in five infects many people. It is only two on average.

And you have to average over a population that is in contact with each other. When in France no one has any contacts, while in Germany life continues as normal, the virus will spread like wildfire in Germany. But if inside the city of Bonn half of the people disappear, the remaining people have less contacts than before. The remaining half should not especially seek each out for the analogy to hold.

How does this analogy help? If we look at the budget of a country like Germany, it makes clear that we should look for reductions where we spend a lot. Work, school, free time. I am as annoyed by the anti-Corona protests as many complaining about them, but compared to 80 million inhabitants that see each other at work and school (indoors) every day, these protests, even if they were really big, are a completely insignificant number of contacts. And the right to protest is a foundation of our societies and should thus have a high priority. I think it is fine to mandate masks at protests and if you do so you should uphold the rule of law.

Less than 20% of Germany is younger than 20. So we could afford to spend our contacts there and ask the other 80% to do more. People often argue that children not going to school is disruptive for the economy. I would also argue a pandemic last one year is a large part of their lives, while additionally young people mostly do this to protect others. There is naturally no need to squander our budget, we could  require older kids to wear masks to reduce the effective number of contacts, install air filters or far UC-V lights in class rooms or reduce the number of days children go to school.

Some feel we should close the schools to protect teachers, but the main reason to care about avoiding contacts is, even now, not about the people being infected today, but about the spreading the virus and all the people who will die because of that.

If we life above our contact budget most of the dying happens after several links in the chain of infection and no longer close to the school: The teacher or student infects 2 others, they infect 4 other, 8, 16, 32, 64, 128, ... Those 128 will reside all over the city/county, if not state and have many different professions. If we would life within our Corona budget and the level of infection would be and stay low, the entire community, including teachers, would be safe.

The exponential growth of a virus also nicely fits to the exponential growth of money in your [[savings account]]. I added a link for young people. A savings account used to be a place where you would keep you money and the bank would give you a percentage of the amount as a thank you, which they called "interest". People who are into money and budgets likely still remember this and how it was normal to "invest" money to have more money later.

When the press talks about exponential growth, I tend to worry they simply mean fast growth. Economic growth is much slower than the pandemic, but when it comes to money people get glowing eyes and talk enthusiastically about compound interest and putting something aside for later.

Similarly when a society invests in less contacts, we can have more freedom later.  Even more so because once the number of infections is low enough track and trace becomes much more efficiently and you get double returns on investment. Like an investment banker who has to pay less taxes because ... reasons.

At least the financial press should know the famous example of exponential growth: the craftsman who "only" asks the king for rice as payment for his chessboard: one grain on the first square, two on the second, four on the third square and so on.

What is true for infections is also true for hospital beds and ICU beds. Once half of your patients are COVID-19 patient, it is only a matter of one more doubling time and the capacity is filled. Exponential growth is not just fast, it overwhelms linear systems like hospitals where you cannot keep on doubling the number of beds.
If we let it get this far we are forcing doctors to choose who lives. Who is in the ICU too long and would likely stay there a long time while this capacity could be used for multiple new patients. Who is removed for the ICU to die. A healthy society does not put doctors in such a position.
With good care around 1 percent of people die in the West (in young societies in Africa less). Supporters of the virus tend to use this number or even much lower fantasy numbers. However, if we let it get out of control like this, ignore the exponential growth and the delay between infections and deaths, the hospital care would collapse and a few percent would die.
Many more people need to got the hospital. In Germany this is 17%. A recent French study reported that after 110 day most patients are still tired and have trouble breathing, many did not yet work again.
At the latest when the hospitals collapse people will reduce contacts, even if not mandated. It is much smarter make an investment earlier, to reduce our number of infectious contacts earlier.
A well-know American president said it is smart to go bankrupt. It is smarter to make money.
Investing early pays of even more because then more subtle measures are still possible, while in an emergency a much more invasive lockdown will be necessary and, for those that only care about money, more damage to the economy will be done.

(As many of my readers are interested in climate change, let me add that I find it weird that when it comes to protecting the climate people often talk about it as a cost and not as an investment that will pay good dividends in the future, just like any other investment. If you mind that our kids will thus have it better than we have it, you can finance the investments with loans, like any business would.)