New paper: Spanish and German climatologists on how to remove errors from observed climate trends 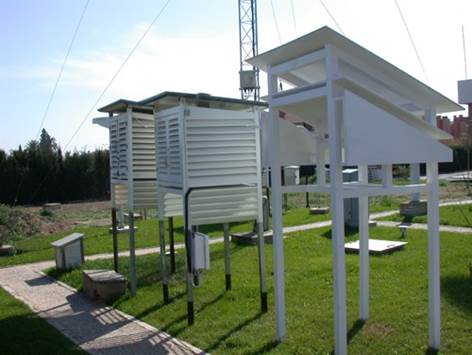 This picture shows three meteorological shelters next to each other in Murcia (Spain). The rightmost shelter is a replica of the Montsouri (French) screen, in use in Spain and many European countries in the late 19th century and early 20th century. Leftmost, Stevenson screen equipped with conventional meteorological instruments, a set-up used globally for most of the 20th century. In the middle, Stevenson screen equipped with automatic sensors. The Montsouri screen is better ventilated, but because some solar radiation can get onto the thermometer it registers somewhat higher temperatures than a Stevenson screen. Picture: Project SCREEN, Center for Climate Change, Universitat Rovira i Virgili, Spain.

The instrumental climate record is human cultural heritage, the product of the diligent work of many generations of people all over the world. But changes in the way temperature was measured and in the surrounding of weather stations can produce spurious trends. An international team, with participation of the University Rovira i Virgili (Spain), State Meteorological Agency (AEMET, Spain) and University of Bonn (Germany), has made a great endeavour to provide reliable tests for the methods used to computationally eliminate such spurious trends. These so-called “homogenization methods“ are a key step to turn the enormous effort of the observers into accurate climate change data products. The results have been published in the prestigious Journal of Climate of the American Meteorological Society. The research was funded by the Spanish Ministry of Economy and Competitiveness.

Climate observations often go back more than a century, to times before we had electricity or cars. Such long time spans make it virtually impossible to keep the measurement conditions the same across time. The best-known problem is the growth of cities around urban weather stations. Cities tend to be warmer, for example due to reduced evaporation by plants or because high buildings block cooling. This can be seen comparing urban stations with surrounding rural stations. It is less talked about, but there are similar problems due to the spread of irrigation.

The most common reason for jumps in the observed data are relocations of weather stations. Volunteer observers tend to make observations near their homes; when they retire and a new volunteer takes over the tasks, this can produce temperature jumps. Even for professional observations keeping the locations the same over centuries can be a challenge either due to urban growth effects making sites unsuitable or organizational changes leading to new premises. Climatologist from Bonn, Dr. Victor Venema, one of the authors: “a quite typical organizational change is that weather offices that used to be in cities were transferred to newly build airports needing observations and predictions. The weather station in Bonn used to be on a field in village Poppelsdorf, which is now a quarter of Bonn and after several relocations the station is currently at the airport Cologne-Bonn.”

For global trends, the most important changes are technological changes of the same kinds and with similar effects all over the world. Now we are, for instance, in a period with widespread automation of the observational networks.

Appropriate computer programs for the automatic homogenization of climatic time series are the result of several years of development work. They work by comparing nearby stations with each other and looking for changes that only happen in one of them, as opposed to climatic changes that influence all stations.

To scrutinize these homogenization methods the research team created a dataset that closely mimics observed climate datasets including the mentioned spurious changes. In this way, the spurious changes are known and one can study how well they are removed by homogenization. Compared to previous studies, the testing datasets showed much more diversity; real station networks also show a lot of diversity due to differences in their management. The researchers especially took care to produce networks with widely varying station densities; in a dense network it is easier to see a small spurious change in a station. The test dataset was larger than ever containing 1900 station networks, which allowed the scientists to accurately determine the differences between the top automatic homogenization methods that have been developed by research groups from Europe and the Americas. Because of the large size of the testing dataset, only automatic homogenization methods could be tested.

The international author group found that it is much more difficult to improve the network-mean average climate signals than to improve the accuracy of station time series.

The Spanish homogenization methods excelled. The method developed at the Centre for Climate Change, Univ. Rovira i Virgili, Vila-seca, Spain, by Hungarian climatologist Dr. Peter Domonkos was found to be the best at homogenizing both individual station series and regional network mean series. The method of the State Meteorological Agency (AEMET), Unit of Islas Baleares, Palma, Spain, developed by Dr. José A. Guijarro was a close second.

When it comes to removing systematic trend errors from many networks, and especially of networks where alike spurious changes happen in many stations at similar dates, the homogenization method of the American National Oceanic and Atmospheric Agency (NOAA) performed best. This is a method that was designed to homogenize station datasets at the global scale where the main concern is the reliable estimation of global trends. 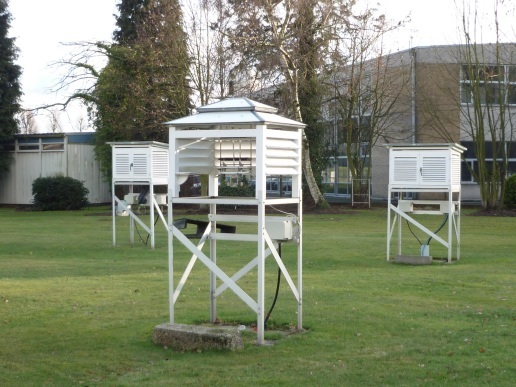 The earlier used Open Screen used at station Uccle in Belgium, with two modern closed thermometer Stevenson screens with a double-louvred walls in the background.

Dr. Peter Domonkos, who earlier was a weather observer and now writes a book about time series homogenization: “This study has shown the value of large testing datasets and demonstrates another reason why automatic homogenization methods are important: they can be tested much better, which aids their development.”

Prof. Dr. Manola Brunet, who is the director of the Centre for Climate Change, Univ. Rovira i Virgili, Vila-seca, Spain, Visiting Fellow at the Climatic Research Unit, University of East Anglia, Norwich, UK and Vice-President of the World Meteorological Services Technical Commission said: “The study showed how important dense station networks are to make homogenization methods powerful and thus to compute accurate observed trends. Unfortunately, still a lot of climate data needs to be digitized to contribute to an even better homogenization and quality control.”

Dr. Javier Sigró from the Centre for Climate Change, Univ. Rovira i Virgili, Vila-seca, Spain: “Homogenization is often a first step that allows us to go into the archives and find out what happened to the observations that produced the spurious jumps. Better homogenization methods mean that we can do this in a much more targeted way.”

Dr. José A. Guijarro: “Not only the results of the project may help users to choose the method most suited to their needs; it also helped developers to improve their software showing their strengths and weaknesses, and will allow further improvements in the future.”

Dr. Victor Venema: “In a previous similar study we found that homogenization methods that were designed to handle difficult cases where a station has multiple spurious jumps were clearly better. Interestingly, this study did not find this. It may be that it is more a matter of methods being carefully fine-tuned and tested.”

Dr. Peter Domonkos: “The accuracy of homogenization methods will likely improve further, however, we never should forget that the spatially dense and high quality climate observations is the most important pillar of our knowledge about climate change and climate variability.”

URV university, English: An international team of climatologists is studying how to minimise errors in observed climate trends

Phys.org: A team of climatologists is studying how to minimize errors in observed climate trend