Hidden in a long German language podcast on the pandemic Prof. Dr. Christian Drosten talked about an observation that has serious policy implications.

At the moment this is not yet based on any peer reviewed studies, but mostly on his observations and those of his colleagues running large diagnosis labs. So it is important to note that he is a top diagnostic virologist from German who specialized on emerging and Corona viruses and made the first SARS-CoV-2 PRC test.

In the Anglo-American news Drosten is often introduced as the German Fauci. This fits as being one of the most trusted national sources of information. But Drosten has much more expertise, both Corona virusses and diagnostic testing are his beat.

Let me give a longer and more technical explanation than Tim Lohn of what Prof. Dr. Christian Drosten claims. Especially because there is no peer reviewed study yet, I feel the explanation is important.

If you have COVID symptoms (day 0), sleep on it and test the next day the antigen tests are very reliable. But on day zero itself and especially on the one or two days before where you were already infectious they are not as reliable. So they are good for (self-)diagnosis, but less good for screening, for catching those first days of infectiousness. The PCR tests are sensitive enough for those pre-symptomatic cases, if only people would test with PCR that early and would immediately get the result. 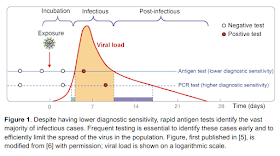 In those pre-symptomatic days there is already a high viral load, but this is mostly active virus. The antigen test detects the presence of the capsid of the virus, the protective shell of the virus. The PCR test detects virus RNA. When infecting a cell, the capsid proteines are produced first, before the RNA is produced. So in that respect one might expect the rapid tests to be able to find virus a few hours earlier.

But here we are talking about a few days. The antigen test can best detected capsids in a probe sample when epithelial cells die and mix with the mucus, which takes a few days. So the difference between the days before and after symptoms is the amount of dead virus material, which the rapid tests can detect to get reliable results. That is the reason why in the time after symptom onset the antigen tests predict infectiousness well. But in those early days possibly not.

This was not detected before because the probes used to study how well the tests work were mostly from symptomatic people; it is hard to get get positive probes from people who are infectious before they are symptomatic. Because you do not often have pre-symptomatic cases with both a PCR and an anti-gen tests, also the observations of Drosten are based on just a few cases. He strongly encouraged systematic studies to be made and published, but this will take a few months.

In the Bloomberg article Tim Lohn quotes Rebecca Smith who found something similar:

In a paper published in March -- not yet peer reviewed -- researchers led by Rebecca L. Smith at the University of Illinois at Urbana-Champaign found that, among other things, PCR tests were indeed better at detecting infections early on than a Quidel rapid antigen test. But the difference narrowed after a few days, along with when the different tests were repeatedly used on people.

The article also quotes Jitka Polechová of the University of Vienna, who wrote a review comparing PCR tests to antigen tests:

“Given that PCR tests results are usually not returned within a day, both testing methods are similarly effective in preventing spread if used correctly and frequently.”

This is a valid argument for comparing the tests when are used for diagnostics or as additional precautions for dangerous activities that have to take place.

However, at least in Germany, rapid tests are also used as part of opening up the economy. Here people can, for example, go into the theatre or a restaurant after having been tested. This is something one would not use a PCR for, because it would not be fast enough. These people at theatres and restaurants may think they are nearly 100% safe, but actually 3 of the on average 8 infectious days would not be detected. If, in addition, people behave more dangerously, thinking they are safe, opening a restaurant this way may not be much less dangerous than opening a restaurant without any testing.

So we have to rethink this way of opening up activities inside and rather try to meet people outside.